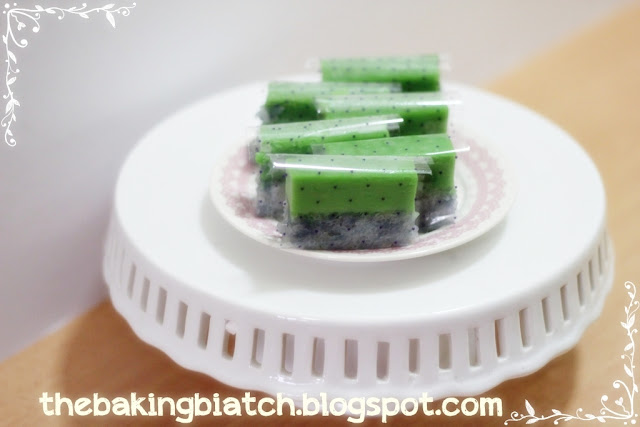 Kueh Salat is one of those classic Nonya Kuehs that is really popular in Singapore and even in Malaysia. This is one of my mum's favourites and I decided to cook/bake/steam one for her. Am really glad that it turned out real well and this was just so well-received. (: Most importantly, she liked it! (:

The recipe was taken from a recipe book but I haven't gotten the title of whatsoever.

Image taken from this page.

To begin with, this is what a tradtional Kueh Salat looks like, or rather, what most people know it to be. However, I love how the glutinuous rice could be so pretty in blue, just like the way it made my nonya rice dumplings so pretty that I decided to do a mixture of blue and white glutinuous rice for this recipe. The blue pea flower, also known as the clitoria flower due to it's resemblance to the female anatomy is one of the best ways to get natural blue food colouring. Am thankful that Ricky gave me a dried pack of it that he has planted previously so I made good use of it (: This can be purchased in the dried form from some medical halls. Alternatively, some baking shops do carry it as well. 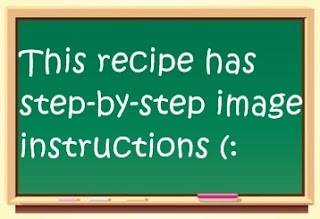 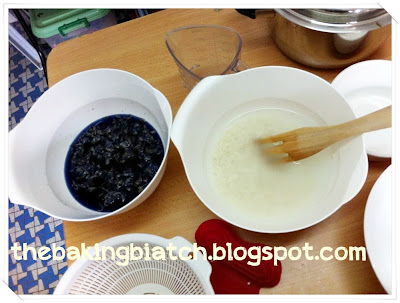 Wash the rice thrice before adding water for it to soak. Soak the glutinous rice the night before for at least 8 hours in separate tubs. Give it the occasionally stir. For the blue rice, just dump the flower into the water and soak it together. 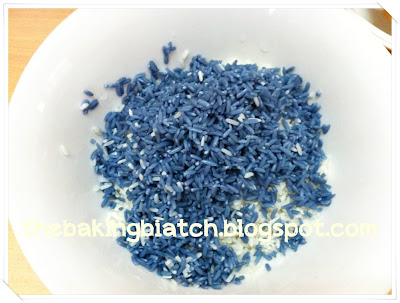 Drain the water from both the rice and mix them together. 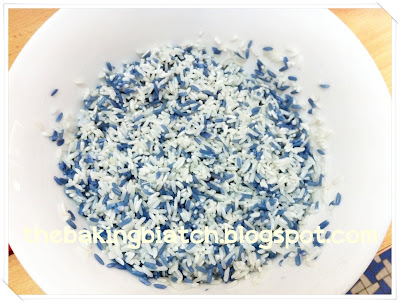 Well mixed! (: Have it ready in a large bowl that's suitable for steaming and also adding of the pandan leaves and coconut milk at a later stage. 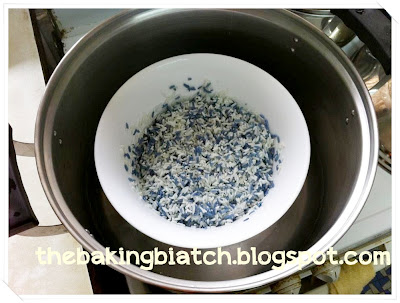 Steam the rice for 20 minutes on high heat. 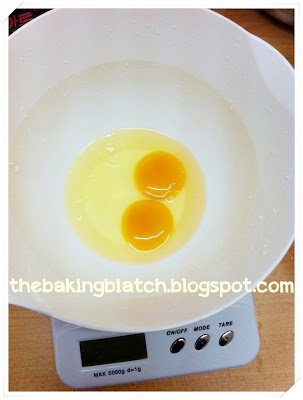 In the meantime, prepare the caramel kaya layer. Two large eggs, each about 60g from Seng Choon. 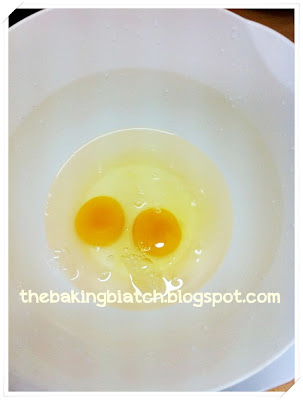 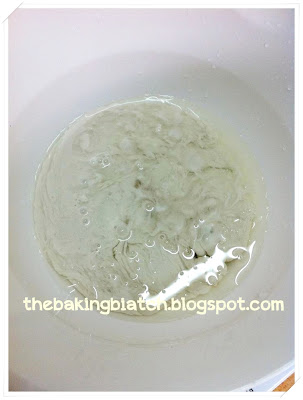 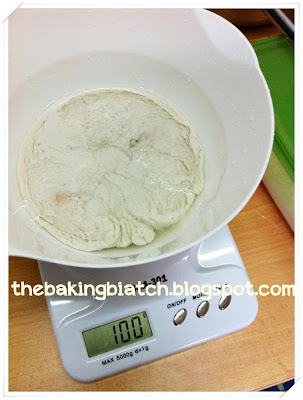 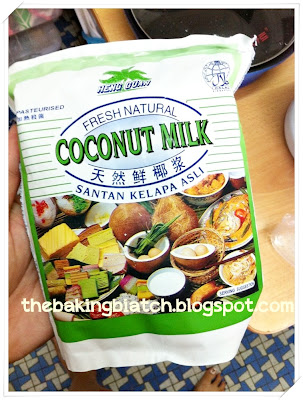 The coconut milk I used. 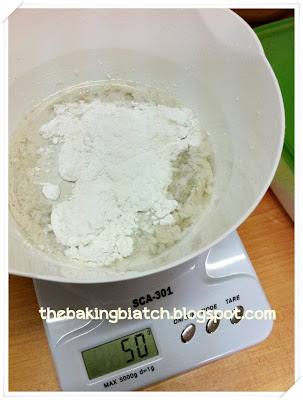 Add in the rice flour. 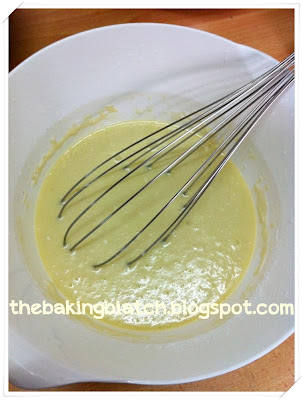 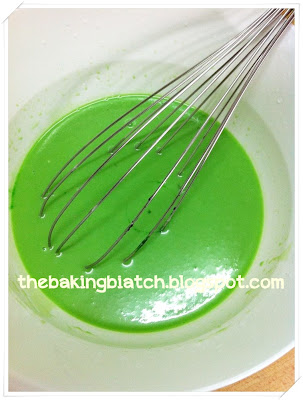 Add the green food colouring and mix well. Pandan Juice just doesn't get enough colour to make it this green ):

Using low heat, cook the mixture by stirring it constantly till it's half-cooked. Set aside. 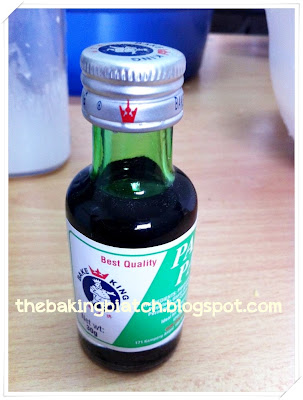 The pandan paste I used. 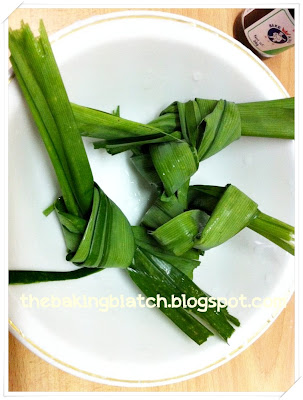 Wash and trim the ends off the pandan leaves. Layer one on top of the other and knot them together. 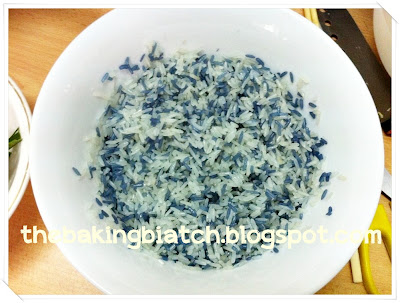 The rice that has been steamed! 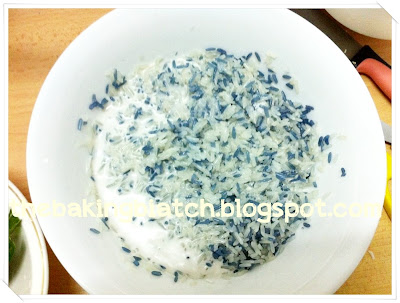 Add the coconut milk for the rice layer. 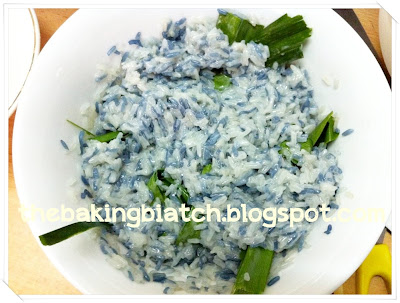 After which, remove pandan leaves from mixture and mix well. 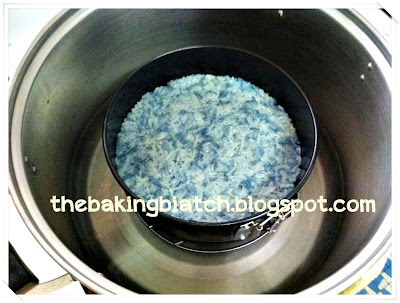 Using a removable base 6" tin pan, scoop the rice into the pan and compress it neatly with the back of a spoon. 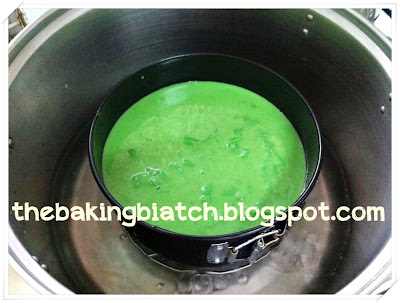 Scoop in 1/5 of the batter into the tin pan and steam for 5 minutes.

When the first layer is steamed, pour in the rest of the mixture in gently. Steam for 40 minutes or till surface of kueh is more of less 'hard'. You can test if it's cooked by gently pressing the top of the kueh, the insides should feel firm. 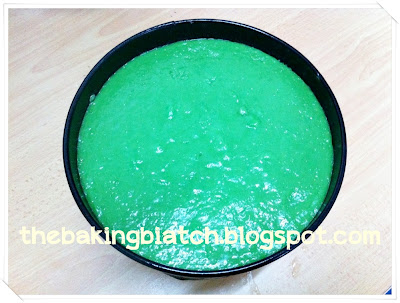 The completed product!
Apply a thin layer of oil on the surface of the kueh to prevent drying. Allow kueh to cool completely before unmoulding. 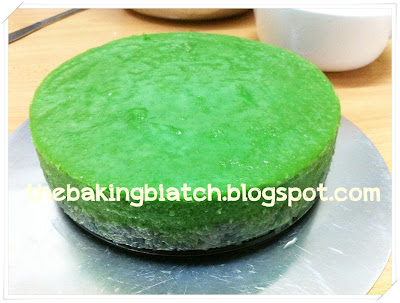 Unmould! (: Slice the kueh according to desired size and serve (: 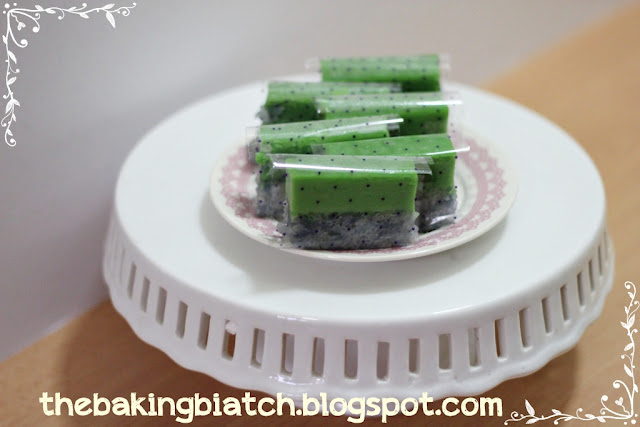 These just taste so good and even loved ones who tried it says that it taste better than the Bengawan Solo version. (: Even though it's time consuming to prepare this, this is one of those recipes that's here to stay (: 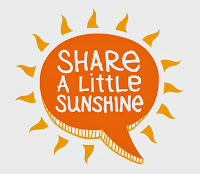 I'd love to see the bakes or stuff you've cooked using the blog's recipe! Do share photos of stuff you've baked or cooked using the blog's recipe with me either via FB message to http://facebook.com/limcynthia OR http://facebook.com/thebakingbiatch OR via email at cynthia.lim.hl@gmail.com! I look forward to hearing from you! (: